Type your search terms above and press return to see the search results.

June 8th actually started on June 7th, when I drove from Grayville to St. Louis. I had found a hotel where I could park free for the first month, and only $20.00 for a second month – or part thereof. It was a nice room, but sleep did not come easily, and I actually only got about 2 1/2 hours before I had to get up to get the shuttle to the airport, to begin the journey. My own peculiar war of becoming “pre-jetlagged.”

I cleared security very quickly, and settled down in the lounge with a cup of coffee and my book to await my departure to Newark. About 20 minutes before boarding, I was approached by the gate attendant, and, since I was flying alone, I was “volunteered” by the airlines to fly to Amsterdam via Washington, DC instead – along with a $400 voucher. I only had to move one gate down, so that was no problem. However, boarding for that flight was delayed, because someone disembarking from the plane fell and hit her head, and they had to call the paramedics. Then, as we were all boarding and stowing our luggage, a panel fell out of the ceiling under one of the overhead bins. It took nearly 45 minutes for them to fix it.

I also discovered the “upgrading” for extra leg room doesn’t really work if you have a bulkhead seat on one of the small regional planes. At least I could stick my legs out into the aisle!

I finally made it to Washington, and since I had upgraded my trans-Atlantic flight to Business Class, I treated myself to a short break in the United Club in the Dulles Airport, where I could get a quick bite to eat for lunch, and a free glass of wine.

When I finally boarded the plane for the trans-Atlantic portion of the trip, I was immediately grateful I’d made the upgrade. Since my 5 hour flight back from Hawaii had been in a narrow economy seat between two linebackers, I was delighted to see the seat I would have for the 7 hour flight to Amsterdam. (The window seat.) The chairs recline 180 degrees, forming a real bed. 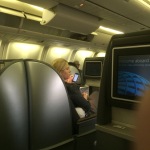 And even though we were delayed by nearly an hour because of severe weather off the coast, I was able to relax with a nice glass of wine (or 2), kick back, and read until the air traffic controllers were able to get us moving.

This site uses Akismet to reduce spam. Learn how your comment data is processed.