Type your search terms above and press return to see the search results.

On the advice of the wonderful staff at the Wyndham Ocean Boulevard resort,

Debbie at the Concierge Desk

I treated myself to the Pirates Voyage Dinner and Show.

And it was a treat.

One of several maps on the ceiling

and a chance to have a pre-show libation.

The Dinner Show itself is a large amphitheater, with those seated on either side of the room
being a member of the Crimson Team or the Indigo Team. (I was an Indigo!) 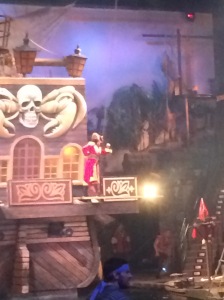 we were also treated to an excellent show. 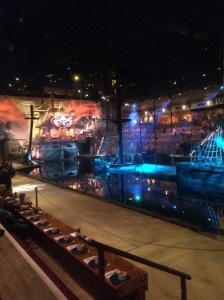 Since the room was really too large to capture everything, I decided to enjoy my meal and the show, rather than spending the time snapping pictures.
Everything was duplicated on either side of the room, in opposite corners.
And I was lucky enough to be seated quite close to one of the corners
where a lot of the action took place.

Including the necessary sword fights,
there were tumbling acts, aerialists, a lot of high-diving,
an appearance by Davy Jones and some of his skeletal compatriots,
more sea lion hi-jinks, an aquatic dog-race,
and a live bird act.

There was also an amusing series of competitions between the “pirates” on the two sides,
which also involved the participation of some of the audience.

They dub themselves “The Most Fun Place To Eat,”
and I concur!

This site uses Akismet to reduce spam. Learn how your comment data is processed.